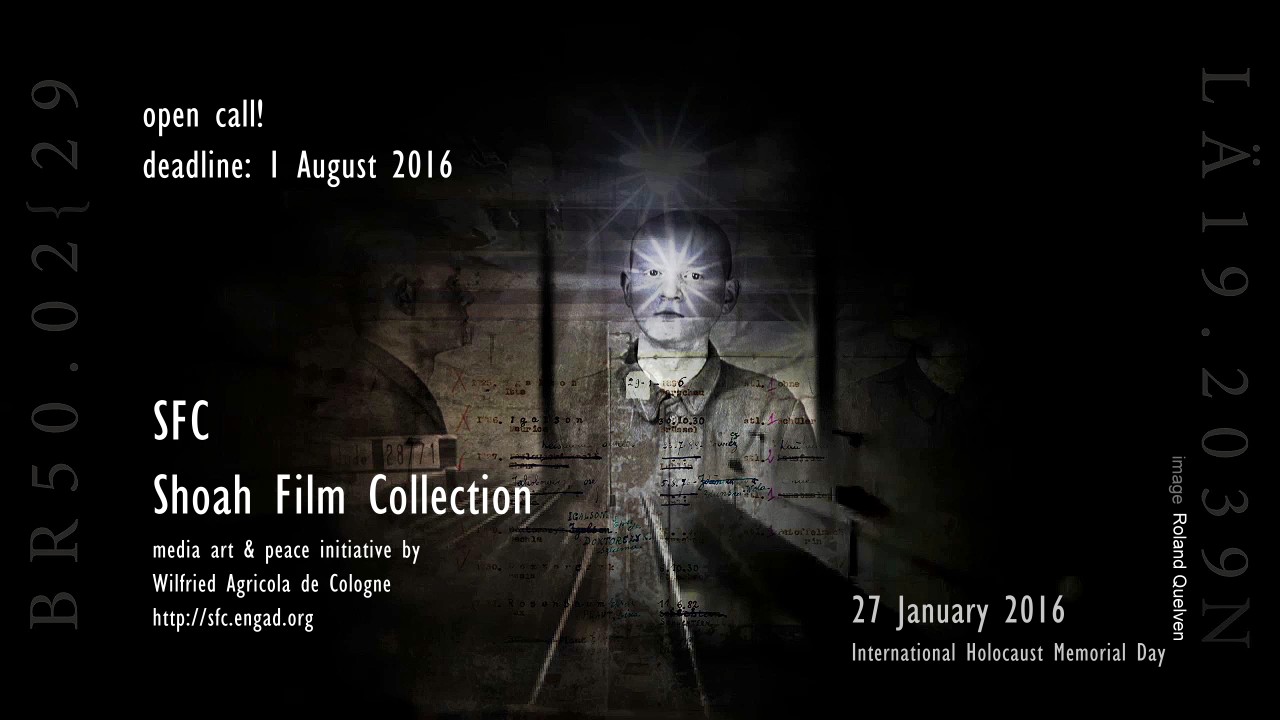 SFC Shoah Film Collection is looking for new contributions in order to continue the success story which started 6 years ago on 27 January 2010 – the International Holocaust Memorial Day – commemorating the 65th liberation of the Concentration Camp of Auschwitz, when this unique media art and peace initiative was laucnhed in the context of “Draft Title: Shoah” and “A Virtual Memorial Foundation”

Since then, each year on 27 January Shoah Film Collection is releasing traditionally its new call for the coming year – so also this year, on Tuesday, 27 January 2016 – deadline 1 September 2016.

This media art and peace initiative by Wilfried Agricola de Cologne, media artist and curator from Cologne (artvideoKOELN international, Cologne International videoart Festival) is addressed to the young generations of artists and filmmakers to deal with the topic of Shoah and collective trauma caused by totalitarianism by using new (audio-visual) technologies and contemporary approaches in order to keep vivid the memory of the collective trauma by senstizing people via art. During the past years, a collection of 70 outstanding art film and videos by artists from 15 countries deveoped, from the experiment to the documentary.

In order to make the more than 80 videos of the collection available to a wider public, Wilfried Agricola de Cologne set up an experimental event structure, named: “AVMCI – A Virtual Memorial Commeorative Interventions” placing Shoah Film Collection into complementary interventions like the screening, projection and installation of the videos, a symposium with an international artists meeting, lectures, exhibitions, artistic performances of different kind, artists talks, discussions ansd much more, in order to activate the artists, as well as the audience.

Shoah Film Collection would like to bring closer to the people what the Holocaust is meaning to mankind and future generations by encouraging artists to face and reflect the aspect of humanity which was lost widely during the era of Nazizm, but not completely. Now more than 70 years after the end of the Holocaust, however, as the idea of totalitarian ideologies and systems to exterminate all those who do not fit in these insane idealogies, the Holocaust never was really finished, because in all parts on the globe, there were genocides and political systems were waging war against the own peolpe, and they still do.

The daily news are overwhelemed by reports from all parts on the globe giving evidence, the Holocaust is going on, always in new kinds of shapes. In this way, again and again such insane ideologies are producing continuously victims – all the millions of refugees from Middle East, Africa, Asia and Latin America are witnesses these days and give evidence of the same kind of inhumanity which was characterizing Nazism, Fascism, Stalinism, Communism or any other kind of -“isms” terrorizing people all over the world.

In terms of the initiative of Shoah Film Collection – it is the process of losing one’s humanity through discrimination, persecution and extermination – which is of artistic interest – a universal topic – in this way – it is humanity standing in the center of Shoah Film Collection – and artists are invited to transform their visions how to save humanity in that kind of global terror aimed to exterminate the human race, as such.

Shoah Film Collection and its manifestations are looking for new audio-visual works using video as a medium in all its variety.

– Deadline: 01 August 2016
– Wanted: single channel videos by film and videomakers from all countries on the globe to be submitted exclusively online.
– SFC is looking for innovative and experimental approaches in dealing with contents and technology
– The full-length films/videos may originate from the years 2000-2015. The submission of extracts is not accepted!!
– Duration: 60 seconds up to max 15 minutes (exceptions possible on request)
– Max 3 films/videos can be submitted.
– Creations using language and/or text other than English need English subtitles.
– The preview copy should be uploaded for download by using the free upload platform WE TRANSFER www.wetransfer.com (up to 2GB) or make the film available for download on VIMEO www.vimeo.com!!
.mpeg2 (DVD), . mov (Quicktime, H264 codec only), .mp4, .wmv (Windows Media), .DVavi
– only selected artists will be notified after the deadline and invited to send a hardcopy of the selected video in best screening quality.

Please add this declaration & sign it with your full name & email address
\
I, the submitter/author, declare to be the holder of all rights on the submitted work.
In case the work is selected, I give – until revoke – SFC – Shoah Film Collection the permission to include the work in the project context online and in physical space for screenings /exhibitions free of charge and use screenshots for non-commercial promotional purposes free of charge, as well. Until revoke means, that the author can remove his work at any time.
//

Please use for each submission a separate entry form
extended deadline: 1 August 2016

Please use this email address for submitting
artvideokoeln (at) gmail.com
and following subject line
“SFC 2016”